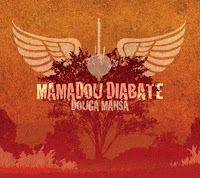 Mamadou Diabate is a virtuoso kora player from Mali and his 2008 release "Douga Mansa" is a beautiful work of art. This extremely satisfying solo album preserves the venerable traditions of Mandinka culture while also infusing those traditions with new energy and creativity, creating a sound that is profound and original. But most importantly, the songs are a delight to listen to, with gorgeous, soaring melodies that soothe and invigorate at the same time. It's amazing to think that the only sounds are from Mamadou's kora, as it often seems like there's several musicians playing at once. And the spiritual potency of the music is as compelling as Mamadou's dizzying mastery of his instrument.

Mamadou's musical lineage goes back seven centuries to the time of Sunjata Keita, founder and hero of the Malian Empire. As a teenager in Bamako, Mamadou worked under the tutelage of his famous cousin and relentless innovator, Toumani Diabate, but he quickly gained his own reputation as a brilliant kora player with a unique, fiery style. He then settled in the United States after touring with a group of Malian musicians in 1996, and he continues to awaken new audiences to the magic of his music.


Mamadou says that his father told him to listen to all of the best kora players and to learn from each one. Well, now it's time for young kora players, and anyone interested in the ethereal sounds of this beautiful instrument, to listen to Mamadou.