Water Is Life, Milk Is Survival 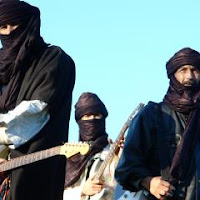 
If you like Tinariwen (which is one of my very favorite bands these days), you'll definitely dig Akh Issudar, the stunning 2008 album from a band called Terakaft on the World Village label. "Terakaft" means "Caravan" in Tamashek (the language spoken by the Tuareg people of the Sahara desert) and "Akh Issudar" is the second part of a Tamashek proverb, "Water Is Life, Milk Is Survival."

The first part of the proverb, "Aman Iman," is the title of Tinariwen's outstanding 2007 World Village release. As suggested by their linked album titles, the two bands are closely related. One of Terakaft's founding members, Kedou, was part of Tinariwen when they performed at the first Festival of the Desert in 2001, and he also played on Tinariwen's first album, The Radio Tisdas Sessions.

As you might expect, Terakaft's music shares a lot in common with the guitar-driven bluesy desert vibes of Tinariwen. Like the music of Tinariwen, the songs on Akh Issudar are haunting, hypnotic, and beautiful - and the band's minimalist approach powerfully evokes the expanse and solitude of the Sahara. But Terakaft also adds its unique flavor to the mix, creating a distinctive and alluring sound all its own. Some of the songs seem to have a softer, more folksy feel to them, adding a melancholy to the music that balances perfectly with the driving blues-rock numbers. 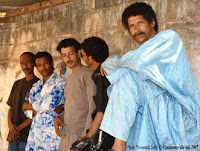 As one reviewer explains, Terakaft is well-steeped in the poetry of its ancestors, but the band "also knows its way around a Fender guitar" and the music is a "marvelous by-product of globalization." As another reviewer explains, the term "desert blues" or "desert rock" no longer adequately captures the diversity of the music of the Sahara, but whatever you call it, the album is "another reminder that this corner of the world is producing some of the best and most rewarding music out there." So check out Akh Issudar, which is is easily one of my favorite new releases - in any musical genre.