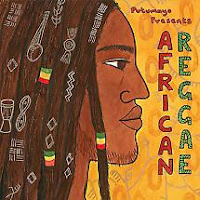 Music’s universal language is often most interesting with an accent. Thus lies the brilliance of Putumayo’s latest release: “African Reggae.” This collection is in part an homage to Bob Marley, marking the anniversary of his 64th birthday (Feb. 6th). This is fitting given the boomeranging influence of the music of the African Diaspora.

Just as the Congo powers the world’s cell phones with tantalite metal, precious bits of Africa energize most popular Western music. Even reggae evolved as a fusion of jazz & R&B (both inventions of Africans in the Americas), with roots Afro-Jamaican folkloric music. Fittingly, the roots rock reggae of Marley’s era resonated strongly back in the motherland, inspiring a reggae renaissance in Africa.

At its best, fusion music’s sum is greater than its addends. Fortunately this is the case with “African Reggae.” Like early African reggae artists Lucky Dube, Alpha Blondy, & Toure Kunda, the artists on Putumayo’s, “African Reggae” tantalize with catchy songwriting, and seamlessly integrating African elements into a neo-Afro-roots reggae stylee. This is a enrapturing album brimming with soul-stirring reggae representing many diverse influences. This CD powerfully augments the body of reggae with inspiring new sounds. Rockers mon!

TRY to walk away not humming Mo'Kalamity & the Wizards’ “Vision.” Hailing from France (but born on the Cape Verde Islands, off of Senegal), Mo'Kalamity has a unique , vaguely Cameroonian sound (think Ras Sally Nyolo), mixing afropop & reggae. The band is killer! Mo'Kalamity sings of the irony of human spiritual isolation despite urban overcrowding.

“Jabulani,” by Zoro (South Africa) is more R&B soul than reggae, but definitely a stand-out tune! The groove ebbs & flows like the tide, the bass, keys, and African finger-picked guitars weave beautifully around each other. Gorgeous- masterfully played by a crack outfit. Melodic runs by a melodica (blown keyboard) are rootsy & attention grabbing. "Don’t let the problems get you down." Yes I. 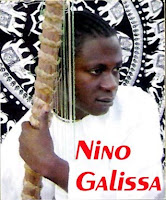 “Bo Ten Qu'Luta',” by One Love Family (Cape Verde) is wicked straight up rockers reggae. The band has some of the best reggae rhythm sections out there. Period. Cho! Catchy as the flu & expertly arranged, this is a track you’ll definitely repeat. I bet this family rocks live.

Raw live drumming & masterful horn soloing crown “Man of Sorrow,” by Nigeria’s Majek Fashek. As much afrobeat as reggae, “Man of Sorrow,”is an anthem for hoping for better times ahead. It is catchy but does not reach the heights of Fashek’s earlier, “Beware,” or “I Come from the Ghetto.”

This is a generously diverse collection, offering entertainment, education, and inspiration. Unsparing in tooth & generous of claw, this is a mean release sure to delight fans of African music & proponents of reggae. 1% of all CD sales go to HOPEHIV, benefiting orphans of Aids in Africa. Music’s universal language is often most interesting with an accent.