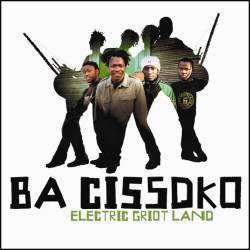 Guinean kora wizard Ba Cissoko just released a new recording, his second, titled “Electric Griot Land.” This time he takes the acoustic kora and amps it even further in the direction of electric blues, funk and entirely unique jams of his own making. Known as the “Jimi Hendrix of kora,” Ba Cissoko is said to play the kora behind his head in concert in tribute to Hendrix, and the album's title riffs off of Hendrix’s “Electric Ladyland” album. This is some outstandingly groovy stuff, and includes spectacular kora solos rammed though a rack of special effects. The recording is not available in the US yet, but you can purchase the CD and listen to one-minute samples of all of the new CD tracks on the Stern's Music site.

You can also check out the post on Ba Cissoko’s first album "Sabolan" by Michael Shereikis on The Afrofunk Forum, and there is a nice profile of the artist on the English language site of Radio France International. On the strength of his first album, Ba Cissoko won the 2005 BBC World Music Newcomer of the Year award. Allmusic.com summarizes Ba Cissoko’s unique approach:


The sound becomes totally new, exciting waterfalls of notes that are palpably thrilling. The rhythm section of bass and percussion anchor it all, and keep the groove going quite effortlessly. This is trail-blazing, purely West African music of a kind not heard in far too long, and completely irresistible.

Calabash Music adds “if Eric Clapton played kora, this is surely what he would sound like.” The new CD is certain to draw a lot of attention for it’s dynamite rhythms and virtuoso performances.