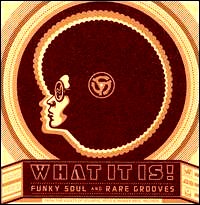 Get your funk face on, quick!--Rhino records has blessed Funkateers the world over with a newly released, epic boxed CD set entitled “What It Is! Funky Soul And Rare Grooves (1967-1977).” Rhino combed through a generation’s worth of dusty tapes and LPs from labels including Warner Bros., Atlantic, Reprise, Atco, and smaller outfits like Cotillion, Curtom, Alston, and Jonie.

And guess what they found? The history and evolution of funk, from the bopping, Stax-inspired grooviness of the early period all the way to the heavy-duty, bone-crushing jams of the mid and late 70s. The set includes 91 newly remastered tracks on four CDs--more than five straight hours of wah-wah pedals, platform shoes, polyester suits and Superfly hood ornaments. Daaaammn!

The songs are arranged chronologically, so you can hear the development of the music year-by-year. Some of the biggest names in American music are represented, most with rare or previously unreleased tracks, including little-known gems from Grant Green, Eddie Harris, Curtis Mayfield, Sly, the Bar-Kays, The Meters, Mongo Santamaria, Little Richard, Earth Wind and Fire, Fred Wesley and many others. There is an entirely re-mixed new version of Aretha Franklin’s “Rock Steady,” (which has recently been appearing on Chopteeth’s live setlist, incidentally).

But connoisseurs of funk will especially appreciate the many singles that have otherwise slipped off the face of the Earth, including finds such as “Mr. Cool” by Rasputin’s Stash, “Wah-Wah Man” by Young-Holt Unlimited, “Won’t Nobody Listen” by Black Haze Express, “Mojo Hannah” by Tami Lynn, “Take It Off, Part 2” by Johnny Tolbert, “Sexy Coffee Pot” by Tony Alvon and the unforgettable “Pig Snoots, Part 1” by Natural Bridge Bunch. Where are these guys today, so we can give them a medal for their Dedication to The Funk?

Predictably, given the scope of this project, the CD set is drawing foaming-at-the-mouth reviews. For example, this bit of poetry from the Amazon.com comments page: “if you’re into funky American music from the 1970s, you’ll cream in your bell bottoms over this one.” Allmusic.com’s review was no less adulatory, although better written:


A righteous undertaking of great magnitude, What It Is! Funky Soul and Rare Grooves trawls through a decade-long stretch of the Warner-distributed archive…and pulls up 91 soul/funk truffles, almost all of which were left for dead shortly after release. While many of these cuts have been repurposed as vital ingredients of hip-hop tracks, which has in turn fostered a voracious collector's market (it would cost a fortune to collect these songs in their original formats of release), the box is a leagues-deep trawl through an otherwise forgotten past... The chicken-scratch guitars, wild Hammond B-3 runs, group chants, and blaring horn punches are served by the dozens, but the box also illustrates an evolution that took place through the '70s…The themed playlists and imaginary compilations hiding within this compact box are innumerable, bound to take the average overthinking funk freak to new levels of nerd-dom…The accompanying booklet could be sold separately, as it contains scads of seldom-seen photos and scholarly track-by-track notes. Rhino also deserves applause for resisting the urge to house these discs in a massive synthetic afro or an oversized wah-wah pedal. You can snugly tuck this thing between your arm and chest and sense its power run through your whole body.

You’ll have the opportunity to demonstrate your commitment to The Funk by plunking down $60 for the boxed set, although I’ve been enjoying it through Rhapsody’s music subscription service—it’s presumably available from other subscription services as well, and Amazon offers 30 second samples of all the tunes. This set is a wonderful contribution to the history of music, one that regular readers of the Afrofunk Forum will definitely appreciate.