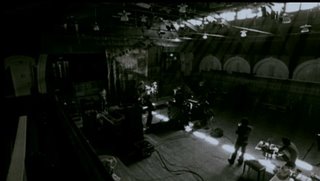 Afrobeat icon Tony Allen has helped start a new “supergroup” that includes Paul Simonon, bassist for The Clash, along with guitarist Simon Tong of The Verve. Founded by Damon Albarn of Blur and Gorillaz, the band played their first live show last weekend in a small pub in Devon, England.

The group claims to be nameless at the moment but plans to release a CD by the end of the year. Produced by Danger Mouse, the new CD is titled “The Good, The Bad and The Queen” (nice touch on the CD title!). The band’s website features some cryptic video clips of the group rehearsing, as well as the an initial single from the CD (“Herculean”), which is available for free download. The single is to be released officially on October 30, along with two other tracks from the new recording.

To my ears, the single and the videotaped rehearsals reflect a pop-saturated mix of The Clash’s Sandinista and The Basement Tapes by Dylan/The Band, with an ambient and folk overlay. It’s a light but interesting touch—no one could really go very far wrong with that backline.

One of the video clips of the band features Tony Allen discussing his interest in the group:


I was looking for something extraordinary, something you cannot even imagine how they are going to work together. People cannot imagine what they are going to hear anyway. They are not going to hear strictly Afrobeat, and they are not going to hear strictly pop or rock.. It’s a combination of both in there, which makes it very interesting, not boring, you know? Because me, I’m somebody that gets bored quick….It’s what I was looking for, this cris-cross. I was expecting to have it whichever way it comes to me, because that’s how it should be. It shouldn’t be what I had before.


Damon Albarn launched his new project 'The Good The Bad And The Queen' with a gig in a tiny village pub last night (October 20).

The show, the first time the group had ever played live, was a warm-up for the band's appearance at the London Roundhouse on October 26 as part of the BBC's Electric Proms season, and saw the group playing back their forthcoming, Danger Mouse-produced album in order.

"I enjoyed tonight night's gig," Simonon told NME.COM. "It's good. It's the birth, and the egg has broken."

Making it clear that the 'The Good The Band And The Queen' was the album's title and not the new group's name - "We haven't got a name at all, we're nameless!" - Albarn was also pleased with the show praising his new group for not resting on their reputations.

"It was great," he explained. "We've done a lot of rehearsal and none of us have taken it for granted even though we done a lot before. You know that everyone has performed in front of 100,000 people, so they're not there to prove anything, they're there to really make sure the music is as good as they can get it."

The Long Island Press gave the new single a generally positive but mixed endorsement that sounds true to me:


“Herculean” could have been sequenced anywhere on Albarn’s last two albums—Blur’s Think Tank and Gorillaz’ Demon Days—and it would have sounded just as natural, and just as good. It’s mellow and pretty, understated and elegant, with a soft Albarn vocal bobbing along to Simonon’s slow-rolling bass line. As a single, it doesn’t make a deep impression...

It’s certainly a new direction for heavyweights like Tony Allen and Simonon, but you would expect this mix of artists to produce something interesting. Anyone out there see the band yet?