Baba Ani: "Fela Still Appears To Me In My Dreams" 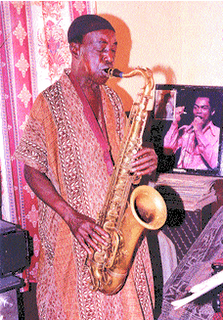 Lekan Animashaun, aka Baba Ani, baritone sax player and leader of Fela Kuti’s legendary Egypt 80 band, gave a revealing interview last week to Lagos’s The Daily Vanguard newspaper. Baba Ani was one of the original members of Fela’s musical universe, joining him to help form Koola Lobitos in 1965. He remained as a key force in the innovative horn section that powered Fela throughout the musical glory days the 1970s, and was also a leader of the Movement of The People, a political party founded by Fela.

In the extended interview, Baba Ani, who just turned 70, reflects on his three decades of playing music with Fela:

The Vanguard: How did you then meet Fela?

Baba Ani: I met him at NBC studios at Ikoyi (Nigerian Broadcasting Corporation). At that time when I was with the NBC band, we used to rehearse on Mondays, Wednesdays and Fridays, unless we were having a show, which was the procedure. I was there on one of the rehearsals and decided to go to the canteen during break and met Fela and introduced myself to him. Before then I had heard about him trying to form a highlife band, when he got back from London he was having a small group, a combo with Tony Allen on drums. So I walked up to him and explained what I heard about him concerning his plan to form a highlife band and explained to him the instrument I could play. He asked if I had my instrument with me and my response was in the affirmative. So, he gave me an appointment for four o’clock on Monday at his then Kalakuta Republic, 14A Agege Motor Road.

That same evening, I got home, carried my baritone and headed for Fela’s house. I met him with Benson Idonije who was producer at NBC, January 1965. He gave me a piece of paper on which he had written the baritone part. So, I set up my instrument and I went and read through it with my instrument and he said to Idonije; ‘ah! He has made it.’ That was how we started together...

Baba Ani was a skilled sight reader, but he explains how Fela wrote out horn parts for the musicians in the group, who came from a variety of musical backgrounds:

The Vanguard: Did Fela write his music, score the drums?

Baba Ani: He did, sometimes he uses his mouth to dictate the rhythm he wants, but initially he was writing. Even he was writing on music manuscript but when it got a stage he was writing on pieces of papers because he had reduced his music writing to tonic solfa instead of writing the note.

The Vanguard: Why did he do that?’

Baba Ani: Because at that time we were having problems with instrumentalists that couldn’t read music. To make it simpler for those who could not read notation on music manuscript, and were able to understand tonic solfa and that was why he reduced his music reading to tonic solfa on pieces of papers.

Baba Ani also describes the mistrust that some Nigerians had for Fela and his revolutionary message:

The Vanguard: How did your family take your association with Fela, the late nights, beating up of the band members (by the police and army)?

Baba Ani: It was battle royale because none of my family members supported my playing with Fela, even playing music because I remember when I was playing with Chris Ajilo at the Federal Palace Hotel, when I dressed up in the evening to go to the Federal Palace to play, some of our neighbours then would call my mother to say that I was a cult member and going for a cult meeting. A good number of my family members did not support it. Even the mother of my wife today for about three months before our marriage washed her hands off, saying that her daughter wasn’t going to marry Omonilu, but later she saw that the whole thing was becoming a reality so, she had no choice but to accept me and the ceremonies were held because I stood my ground like I still do today.

This month, Baba Ani was also honored for lifetime achievement by the Nigerian Committee for Relevant Art (CORA), part of the Nigerian Great Elders Forum, as described in The Sun newspaper (Lagos).

The late-70s Baba Ani solo albums Mr. Big Mouth and Low Profile (with Tunde Williams) were recently re-released, but their scarcity and high price reflects the collectors value and uniqueness of the music.