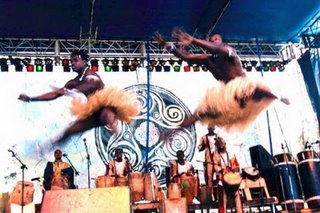 Bethesda, Maryland’s prestigious Strathmore Music Center hosted a performance by one of Ghana’s fiercest dance-drum ensembles, Kusun on June 14th, 2006. A thrilled, standing-room-only audience remained transfixed on Kusun’s spectacle: dancing, clapping, singing along, and mobbing Kusun’s merchandise table until the end of the two hour onslaught. Kusun’s resolve to revive traditional Ghanaian drum music in an era when bubblegum pop & hiphop dominate the market (in the US and Ghana) is noble, and has resulted in a musical experience of the highest order & importance.

Kusun (aptly translates, “living culture”) is a talented ensemble of musicians and dancers from the Ga people of southern Ghana (the indigenous people of Accra & Tema). Founded by Nii Tettey Tetteh in 1997, Kusun includes past members of Ghana’s prestigious “National Ballet” and “The Pan African Orchestra” (seek their monster CD, “Opus 1”). Tetteh also hosts a drum school in Ghana which is visited annually by international students. Originally based in Ghana, with administrative offices in Australia, Kusun currently resides in Floyd, Virginia- the result of a 2001 invitation to perform at the Floydfest international music festival by Kusun Drum School student, Kris Hodges.

Kusun (like the Ga in general) are great scholars of music, learning & performing the drumming of the nearby Ewe, Akan, and Dagomba along side their own Ga traditional forms. In this sense Kusun’s music may be favorably compared with the pan-Ghanaian drumming of Mustapha Tettey Addy’s “Obonu” group. But Kusun’s music takes a step in a new direction, the addition of Highlife guitar, and bass covered by the expressive Gome drum. Nii Tettey Tetteh calls this amalgam, "Nokoko" (something something). It is a pleasing mix indeed, adding a melodic element with touches of the Western jazz, Cuban son, and Ghanaian palm wine music inherent to Highlife.

Kusun are polished consummate performers. The arrangements are air-tight, the band relaxed and all smiles. Tetteh banters & jokes with the audience with friendly confidence, informing and entertaining. The dancers are great show-stealers, with inhuman strength, the grace of large predatory African cats, new elaborate costumes for each dance/culture, and huge amounts of audience engagement. They tell stories without words. Their acrobatics thrill & amaze- and they make it look effortless, but don’t try this at home!

Check out the calendar on Kusun’s website and experience this powerful group for yourself!