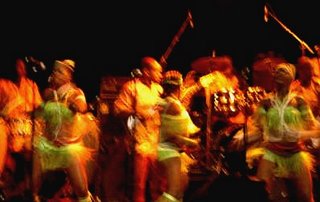 In our first three months of existence, The Afrofunk Music Forum has received visitors from 56 different countries---there are a lot of Afrobeat fans around the world!

Reader Julio Punch from The Netherlands has written up a nice report of concert by Femi Kuti and Positive Force, which recently took place in Breda, Holland on May 29th, 2006. Not surprisingly, Femi is going strong, and it sounds like he has some new material in the works. Here is an excerpt from Julio Punch’s review (including photo above):


Towards nine there’s a reasonably large crowd and only a few minutes after nine… five of Femi’s musicians take the stage. Guitar, drums, bass, percussion and keyboards set out a basic rhythm. The horns section appears a couple of minutes later. Femi’s “Dancing Queens” are the next to appear and the crowd cheers them on. Femi is last to appear and judging by the reaction of the crowd it seems as if the popularity of African music has hardly diminished. As Femi takes us through his repertoire he seems to be completely one with his music. Sometimes playing keyboards with his eyes closed, sometimes making almost spastic movement with his arms to the beat, sometimes dancing uncontrollably. The horns section of five men provided an explosive topping for the basic rhythm set out by their five colleagues.

Femi guides us through all his greatest hits like “1,2,3,4”, “Beng, Beng, Beng”, “Stop Aids” and a cover version of his father’s famous song “Water No Get Enemy”. There was a moment of repose with a lullaby like song calling for peace on earth. It was only when Femi’s crowd pleaser “Shotan” was played that the crowd really went wild. After two more songs the musicians left the stage. But the crowd was in for more and the rhythmic applause that continued for minutes could not be ignored by the band. Four more new songs that I hope will make it on to the next album concluded a wonderful evening. A big salute to Femi and The Positive Force for bringing us 2 and a half hours of kick-ass Afrobeat music. Femi, you are truly your father’s son.

You can read Julio’s full report here, or check out the new Fela bulletin board that he is starting. I hope other readers of The Afrofunk Music Forum will send in concert reports or other entries---we will be glad to include them here.