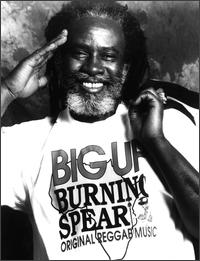 Reggae genius Winston Rodney, aka Burning Spear, now has his essential early work available on a CD called Creation Rebel. This collection captures Spear’s crucial 1968-1974 Studio One material produced by Clement Dodd, and it’s one of my favorite CDs ever. Beyond the massively profound groove demonstrated here, this set of material is noteworthy for the fact that it pre-dates virtually all other conscious reggae. It was recorded prior to Bob Marley’s groundbreaking Lee Perry sessions, yet appears fully formed musically and politically. I’ve really enjoyed listening to these early tracks, and I’m sure you will too. The song “New Civilization” is even more relevant today than when Burning Spear came up with it. We need a change in direction, and Spear certainly has some suggestions.

And while we’re at it, a new Burning Spear video documentary is scheduled to be released shortly, titled "Burning Spear: The Story of A Living Legend." Last week, Spear released a wonderful 4 minute trailer for the documentary that includes some excellent live concert footage as well as interviews with the man himself. I’m very much looking forward to seeing the full documentary. Two fans who are interviewed in the trailer give some perspective on Burning Spear:


All the time he is bringing a message. That is what I like about the guy’s music. The music is not just there—it lingers on. There is a lingering spirit in your mind.
When you finish listening to Burning Spear you have this inspiration and this spiritual upliftment that is second to none. If you’re not a serious spiritual person and you listen to some Burning Spear, then you definitely will change.

Burning Spear also has an excellent website that currently includes a free download of a new track, titled “Music Business Dub,” as well as a free remix of “Never” by Paul Oakenfold. Although he’s about to enter his seventh decade, Burning Spear remains as productive and energetic as ever.