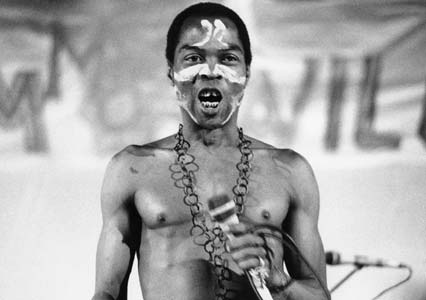 The BBC has a superb streaming radio retrospective of Fela Kuti’s career and influence. Originally broadcast in 2004, this is one of the best histories of Fela I have heard, definitely worth checking out. It includes some wonderful insights and interviews. From the BBC intro to the show:


Seven years on from his death, the world is starting to recognise the work of Fela Kuti as one of the most significant bodies of 20th-Century popular music. The sheer power of his music, the scathing dialectic of his lyrics, his controversial lifestyle and consequent iconic status have all nurtured a rich legacy. But who was he? What was his impact, before and after his death, in African politics and music? Was he a revolutionary prophet and voice of the people or a just an outspoken rock star, a patriarchal hedonist who famously married 27 women in one ceremony?

Max Reinhardt and Rita Ray founded the Shrine nightclub in London, and produced the revealing 44 minute radio documentary. In it, they travel to Nigeria and interview some of Fela’s family members as well as many musicians who played with him, including original Africa 70 drummer Tony Allen and keyboardist Dele Sosimi. Fela biographer Michael Veal and journalist Vivian Gold also add historical context and perspective. The radio documentary also frankly discusses the mixed legacy of Fela’s relationships with women, and also his strict approach with other musicians regarding song arrangements.

Max Reinhardt summarized Fela’s huge influence in Nigeria and around the world:


Fela was the only African musician to have taken such a strong and consistent and explicit stand on the political realities affecting his society, documenting that reality in recorded works that we can still go back and listen to.

Fela paid for this stand, as the documentary illustrates in “Fela by the numbers:”

The BBC website also highlights a nice feature article on Fela by DJ Ify as well as an online photo exhibit of images from the art exhibit The Black President, which was presented at New York’s New Museum of Contemporary Arts as well as The Barbican in London. Fela Lives!