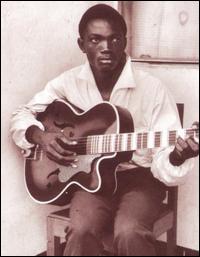 Afropop Worldwide currently has a very interesting article about the history of Congolese music. It’s based on interviews with Dr. Kazadi wa Mukuna, an ethnomusicologist and author who teaches at Kent State University in Kent, Ohio, and Lubangi Muniania, an arts educator, community scholar and president of Tabilulu Productions based in New Jersey.

The authors review how the brutal history of the Congo created a modern musical culture that prized “authenticite,” a nationalist sense of black power, set in opposition to 500 years of colonial exploitation and racism. Kazadi wa Mukuna discusses how even corrupt dictators like Mobutu Sese Seko were able to take advantage of the need for “authenticite” in justifying their rule—for example by enlisting Franco, aka Luambo Makiadi, a towering figure in Congolese music. Franco was a powerfully influential singer, guitarist, bandleader, composer and arranger, and Kazadi wa Mukuna explains how Mobutu took advantage of Franco’s fame:


Mobutu was not an idiot. He was a very smart man. He knew that he could use musicians to push forward his mission. Franco was instrumental. And Franco took advantage of this to compose songs about authenticite. Franco wrote about everything. He spoke about every aspect. Authenticite was subject that he was close too. “Belela Authenicite Congres Na Congres” MPR is one of those song in which he truly revealed his belief. He says in Lingala, “In a foreign country, a foreigner asks, “Who am I?” Proudly and in my way I will tell him that I am Zairois. My party is MPR. My chief is Mobutu.” It all comes down to “belonging.” Franco took that traditional concept of belonging and used and summarized it to put it in terms of authenticite as Mobutu defines it saying that “MPR is family and politically organized. If you are born Zairois, you are a member of the MPR.”

The article also addresses how high copper prices in the early 1970s gave Mobutu an opportunity to pose as a legitimate leader by hosting the epic music festival that accompanied the Ali-Foreman “Rumble in the Jungle” fight, which included James Brown, Stevie Wonder, the Fania All-Stars and many other musical heroes.

There are nice summaries of Franco’s musical influence on the Leopardman’s Guide, RetroAfric and All Music Guide. You can purchase Franco’s historic 1956 recordings on the RetroAfric website.