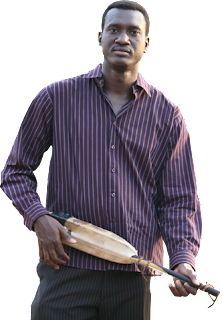 Bassekou Kouyate and Ngoni Ba is a fantastic band that you need to hear now. Bassekou Kouyate is a master of the ngoni, a small, traditional plucked lute with a big place in Malian history and a rich, deep sound. Bassekou is also the master bandleader of Ngoni Ba, an insanely talented group of four ngoni players (including Bassekou and two of his brothers), each with an ngoni of different size, shape and sound. The music is hauntingly beautiful and downright bluesy. Their debut album, Segu Blue, is surprisingly powerful, capturing the sparse majesty of the Niger River in Mali and demonstrating the full potential of this magic little instrument. Their latest release, I Speak Fula, sets the bar even higher. With performances from Toumani Diabate, Vieux Farka Toure, and Kassy Mady, this is a must have if you have any interest in African blues.

Bassekou has done stellar work for many years, on many albums, with Toumani Diabate, Ali Farka Toure, Oumou Sangare, Taj Mahal and Bela Fleck. So I've long known about his artistry on the ngoni. But with his own group he gets to show how talented a composer and arranger he is. The music is traditional, yet it's forward-thinking.

But the albums could not prepare me for the live show. Endless funky jamming that had the crowd moving from start to finish, with Bassekou setting the groove and none other than Taj Mahal in the first row right next to me, dancing, singing, and yelling with joy. At one point Bassekou was explaining to the crowd what an ngoni was, and Taj yelled out "It's the African banjo!" It was a great night and the level of energy and musicianship was unparalleled.