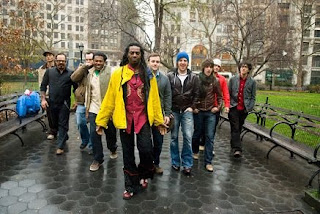 The Brooklyn-based group Antibalas kicked off a swarming new brand of afrobeat and experimental funk with their 2007 album Security. The dozen-strong members of Antibalas (which is spanish for 'bulletproof') have teamed up with the prolific indie-producer John McEntire (Tortoise, Stereolab, Tom Ze) to capture the new direction of the group’s music. Anti- Records describes the relationship the group has with their new producer:
"Enticed by McEntire to explore and unleash sides not previously mined on earlier recordings, the seven original compositions presented here illustrate perhaps a darker, more dynamic approach that's guaranteed to shock and dazzle new and old fans alike. This is music that was made to linger long after the party's over."

The raw size and technical complexity of Antibalas’ new album immediately lends credence to McEntire’s work with other nu-jazz heavyweights, Tortoise. Antibalas even had a review of the album from industry heavyweights at Rolling Stone. 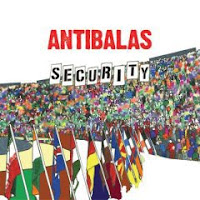 I was overwhelmed by Security. Antibalas has sufficiently mastered Fela’s approach to jazz and African music, but crosses genres even further to infuse experimentation and jazz in this already eclectic sound. Security alludes to the experimentation of late John Coltrane and the controlled chaos of Miles Davis’ Bitches Brew while staying in the realm of afrobeat and funk.

Security is just plain kickin’. I like to be challenged when listening to music, but I also like to stay on terra firma and retain some groove-sensibilities. Antibalas captures all of this on their new album. I can’t ask for much more. The instrumental nature of the album reflects the group’s mastery of their instruments and their brand of music. Even after all this, the vocal work continues in the style of Fela and embraces the energy of afrobeat. The raw intensity of their live show is reflected in this new album. If you have a list of albums to check out, Security should be placed near the top.