"How does it feel when someone calls you the best drummer in the world?" 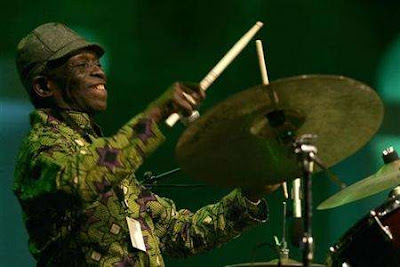 
Reuters published a rare interview with Afrobeat icon Tony Allen last week. Fela's original music director and musical dynamo is still going strong. In a conversation with Tom Pfeiffer of Reuters, Tony comes out swinging, telling young musicians not to "run away from their roots," and denouncing the Nigerian government for "every time putting the wrong person in place." Check it out:

RABAT, Morocco (Reuters) - Legend has it that when Nigerian drummer Tony Allen quit the band of Afrobeat pioneer Fela Kuti, it took four percussionists to replace him.

Brian Eno called Allen, 67, "perhaps the greatest drummer who has ever lived." Kuti said that "without Tony Allen, there would be no Afrobeat."

Allen recorded over 30 albums with Kuti and his group, Africa '70, which fused jazz, funk and African traditional singing. The songs were usually more than 10 minutes long, and Kuti's lyrics were often angry diatribes against corrupt African dictators and Nigeria's military regimes.

Allen, who made an album in 2006 with Damon Albarn of English rock band Blur, was speaking at Morocco's Mawazine (World Rhythms) music festival in the capital Rabat.

Q: Is your success due only to talent or did luck also help?

A: I would say I was born with it. I would say it's in the blood. My father took up music as a hobby -- when he came home from work he played to amuse us, my brothers and my friends. I didn't know I was going to end up playing music. I studied electronics... I just went in the evening to practice the drums. I heard a new band was going to be formed and I said to myself: 'It's now or never'.

Q: Are talented young musicians appearing to replace your generation?

A: There are many young talents coming up now who only need the exposure. The only problem is that they are running away from their own thing, their roots. They are stuck into stuff borrowed from abroad and that's something I really detest.

Q: Is it easy these days to make it as a professional musician?

A: No, no no -- It's harder now, it's too commercial in this modern age where everyone can manipulate the computer. You can make music without even being a musician. And with online piracy you can't sell enough records.

Q: Your home country is still troubled by corruption, poverty and unemployment. What needs to change in Nigeria?

A: The government. Every time, they put the wrong person in place. I don't see Nigerians benefiting from all the oil they have. This government needs to create a social movement. Maybe it must go to the poor areas, check it out, ask people what are their needs. The people in power say if you are complaining too much it is because you are poor. The anger is reflected in the music. But if the music is too militant, the media won't touch it. So how do you send this message?

Q: How does it feel when someone calls you the best drummer in the world?

A: I know I've done my homework properly, but of course it doesn't get to my head. Call me anything -- I don't give a shit. I just want to move forward, I've kept on doing what I wanted to do. I kept on exploring and learning more.

Q: What are your plans for the future -- is it getting harder to play and to tour?

A: As for my playing, I am in control. My new album is recording now between Paris and Lagos, I finished recording now and it's just mixing. It's called "Celebration." Just wait -- it's going to be a surprise.