Filtering folkloric, tribal music through popular Western forms is perhaps a natural evolution in an increasingly homogenous world. While such fusions are exciting to many world music fans, and may ensure the survival of otherwise vanishing traditions, there are the dangers of sophomoric execution, diluted traditions, and a product that is less than the sum of its parts. Fortunately, Oki Dub Ainu Band & Marewrew have created an elegant fusion that is entertaining, educational, and retains a strong Ainu identity.

Oki and his fellow musicians are Ainu, a pre-Japanese (“Jomon”) culture native to the northernmost island of Japan: Hokkaido. Like Native Americans, the Ainu were the indigenous people of Japan before the current dominant culture invaded (from China or Korea). The Ainu are animists, with the bear being a central deity (kamuy)- Oki's version of a Rastafarian "Lion of Judah" features a bear. While Ainu epic poetry survived, their instrumental culture was reduced to museum collections, until Oki (a Tokyo University educated, US employed special effects artist) learned how to play and construct tonkori, the Ainu lute. Oki relocated to Hokkaido & dedicated himself to traditional and fusion Ainu music.


While Oki has performed and recorded traditional Ainu tonkori music, his focus is on a unique fusion of simple catchy traditional Ainu melodies & songs with reggae/afropop flavored rhythm section backing. Oki’s fusion is unique, inspired, and demonstrates a high level of education in the foreign musical forms he is incorporating, ensuring its success. This is a thoughtful choice: reggae & afropop are hip & relevant, and both flow with Ainu musical forms. Rolling triplet lute ostinatos blend seamlessly with African-triplet Afropop beats. Reggae upbeat skanks on guitar and hi-hat follow traditional Ainu clapping rhythms. The reggae-esque bass lines & drum-kit rhythms underpin the Ainu melodies without obscuring them. 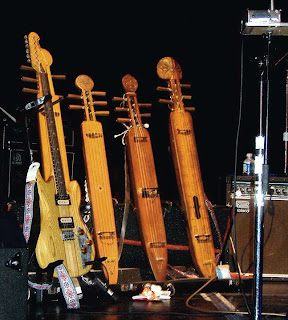 So what does it sound like? Well, the tonkori itself sounds quite like a West African kora or ngoni, only darker, with more overtones (sympathetic string vibrations), and less polyrhythms, like the Celtic harp. Ainu singing is highly rhythmic, with beautiful catchy melodies like Maori or Polynesian ritual singing. Oki’s music centers around the catchy Ainu song melodies with mostly harp accompaniment, but occasionally reggae or funk electric guitar work. 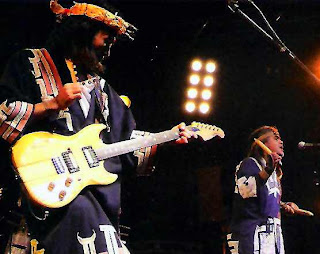 Nakamura’s bass guitar work is rooted in reggae’s sparse lines, but brilliantly obeys the rules of Ainu melody & rhythm, so it highlights without imposing. Numazawa’s drumming is tasteful mix of mostly rockers or steppers reggae, and added much of the African polyrhythmic coloring to the sound on hi-hat, or melodic tom work. The dub echo effects were used sparingly, and in smart places, rightly highlighting the tonkori most often, but also providing echo tunnels of the snare drum & vocals occasionally.

The female “Marewrew” Ainu a-cappella group who joined Oki Dub for this performance were stunning, employing hyponotic canon singing, and evoking Bulgarian choir singing. The concert was divided into two sections: one where Oki Dub Band provided tasteful backing for Marewrew’s traditional Ainu songs, and the second half that was primarily Oki Dub Band.

Bottom line, Oki Dub Band is a must see, and a prime example of how wonderful indigenous fusion music can be!