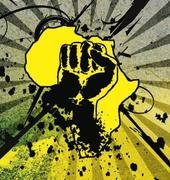 The innovative label Black Mango Records has just released an interesting new compilation of African Hip Hop titled Afrolution Volume 1. The recording tries to capture the fertile exchange of hip hop beats and related rhymes floating around and within Africa, and it’s a timely representation. Black Mango describes itself as:


a record label run by Africans living in and between London, Johannesburg, Harare and Cape Town. We focus a lot of our energy on releasing the new wave of African music coming out of the continent. However, being the music fanatics that we are we don't restrict ourselves to the genre of artists we release.

Afrolution is a sub-label of Black Mango, which also promotes Afrobeat, Jazz and other styles, but they claim to be “the home of one of the fastest growing African Hip Hop labels on the planet.” Their website explains what the recording is aiming for:


We've tried to keep this album as real and original as possible. It was always going to be an eclectic mix of styles because Africa is a continent with many cultural dynamics and influences - we've done our best to represent that although we acknowledge the fact that we want to cover more countries and more female artists - it will happen as we grow. On the album, we've managed to bring together the best of African Hip Hop from Zimbabwe, South Africa, Malawi, Tanzania, Kenya, Senegal, Gambia and Nigeria. Afrolution is actually the first compilation to merge both the Francophone and Anglophone countries on one CD.

You can check out samples of the recording on the Calabash Music website, or purchase tracks and CDs. The reaction to this new recording has been very positive virtually everywhere, although it’s only been out a few weeks. For example, this from the Sengalese rap website senerap.org:


Afrolution Vol. 1’ epitomises the birth of a new movement fuelled by a fervent desire to create space for new expression in global hip-hop. The CD/DVD compilation serves as the grand inauguration to African hip-hop and no doubt will occupy a historical reference point for the future of this new genre.

With hip-hop boasting a copious amount of sub genres – commercial, gangsta, conscious, Latino and UK hip-hop to name just a few - why would anyone take another new genre like African hip-hop seriously? Judging by the CD it will be by the sheer quality and innovation of the music and thus will appeal to both hip-hop lovers and curious urbanites.

The Fly Global Culture website has an interesting article reviewing the album as well as other recent African hip hop efforts. It praises the recording as “another measure of the confident (and competent) state of rap music in Africa,” but also notes that “an album that attempts to cover a whole continent that has gone hip hop crazy over the last few years is bound to come up short in places.”

Also check out the nuanced review on Africahiphop.com, which notes:


the cd compilation doesn't go out its way to unearth rare gems from African backstreets or Unsigned Hypes…its real strength is in presenting the right pick of tracks which all seem to share a raw feeling and a lyrical urgency. Most artists are of the 'no compromise' type which may hurt their options back home to exploit their music commercially, but which gives them a street popularity.

Listen to this talked-about new recording and let us know what you think, and enjoy the friendly Afrolution site on My Space.