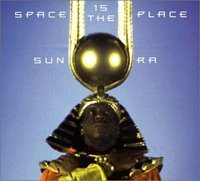 "Music is not part of this planet in a sense that the spirit of it is about happiness. Most musicians play earth things, about what they know, but I found out that they are mostly unhappy and frustrated and that creeps over into their music. But people they have dreams of going other places and seeing other things. Musicians should not get too tied up in academic things and their egos and the money thing, or they'll never be able to really create." -Sun Ra

No discussion of anything called "AfroFunk" is complete without Sun Ra. He was a black man from the planet Saturn. He led one of the most spectacular big bands of all time (the Arkestra) and recorded dozens of beautiful albums with titles like "Art Forms of Dimensions Tomorrow." Enough said? A few days ago, I revisited two amazing films about Sun Ra: "Space Is the Place" (1974) and "Sun Ra: A Joyful Noise" (1980). Pure joy, my friends! Sun Ra is one of the most radical, inspiring figures in 20th century music. Period.

Here are links to some nice web pages about Sun Ra:

The two films I mentioned are both available at Netflix, and a number of Sun Ra recordings are also available through Forced Exposure.

See you in the Omniverse ...