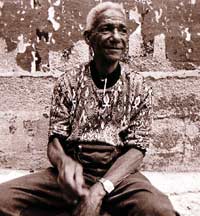 The late, great percussionist Pancho Quinto is a legend among fans of Afro-Cuban music. He was, paradoxically, revered as both a relentlessly creative innovator and a standard-bearer of tradition.

This is from a brief but lovely tribute to Pancho Quinto from the World Music Network:

"Francisco Mora, better known as Pancho Quinto, passed away on 11 February 2005, from complications resulting from several strokes he had suffered in recent days. Pancho will be remembered as a pioneer in Cuban music for his innovations in the use of traditional instruments and rhythms. His career spanned six decades, and he started as an apprentice drummer studying the traditional rhythms and songs played on the bata drums from the Yoruba tradition, retained and passed on in Cuba over centuries ..."


Here are links to two reviews of Pancho's last record, "Rumba sin fronteras", from the BBC and Roots World.


As long as people play rumba, the name of Pancho Quinto will be remembered. Iba e!