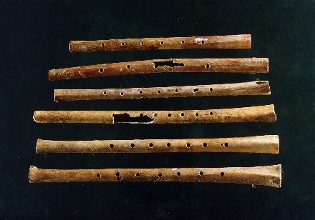 Blogs that allow comments offer a forum for people from all over the world to communicate at something between the speed of light and the speed of typing. So I want to ask what I think is an interesting and provocative question about music and encourage all readers to post your thoughts by clicking on “post a comment” below and typing in your ideas. People from more than 50 countries have visited the AfroFunk Music Forum in its first few months, so let’s see if we can get a little international discussion going about the music we all come here to read about!

My question is this: are some styles or specific pieces of music universally accessible?

I am NOT asking if music is universal among humans. As far as I know, all human cultures make music in some form and it seems like music may be one of the characteristics of humans in general. And we have been doing it for a great long time. Indeed, check out this news release about 7000 to 9000 year old bone flutes from China that includes links to wav files of some of the actual instruments being played: (http://www.bnl.gov/bnlweb/pubaf/pr/1999/bnlpr092299.html).

Also, objects interpreted as bone flutes have been found in Europe associated with Homo neanderthalensis, a.k.a. Neanderthal man, a hominid species closely related to us and now extinct. So perhaps music is a characteristic of hominids more generally, raising the question of when music making evolved. But that is a separate discussion.

What I am asking is whether people from any culture immediately “get” certain pieces of music regardless of its style or cultural of origin, or are cultural boundaries so tight that people from different cultures cannot appreciate each others music in the same way as they can appreciate music from their own culture?

Although I am no expert, it is my understanding that Rastafarianism has specific ideas about how various notes, chords, and rhythms affect and access the spiritual state of both performers and listeners, suggesting an awareness of the common human response to some musical forms. Afrofunk and other genres influenced by African styles of music (reggae, blues, funk, jazz, various Latin American styles) are what I listen to almost exclusively, but they are far removed from my personal or familial cultural heritage as a white boy from the southeastern US.

My contention is that these musical styles (and certainly others), or at least the preeminent performers of these styles (e.g., Fela, JB, Bob Marley, Duke) surpass the confines of their own cultures and connect to something that is present in most humans. For me, these are musicians whose work makes me say, “That is simply right.” This is obviously a big can of worms, but for fans of a musical style such as Afrofunk with a growing international fan base, reflected in the readers of the AfroFunk Music Forum, it seems like a logical can to open.

So, don’t be shy! Join the discussion and post a comment with your thoughts and include where you are from. If you feel as I do, tell us who you include on your list of musicians with universal reach. If you think we are more limited by our own cultures, tell us why you think so.