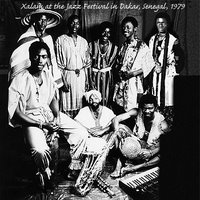 Matt Yanchyshyn of the outstanding African music blog Benn loxo du taccu has an nice post this month about the Senegalese group Xalam:


Xalam are a Senegalese band who originally formed in Dakar in 1969 before moving to Europe in the mid-70s. Their tight funk-rock-traditional fusion sound brought them great success abroad. They toured for 15 years all over Africa, Europe and North Africa, playing with the likes of Dizzy Gillespie, Crosby, Stills, And Nash, and The Rolling Stones along the way. The original group disbanded in 1989 when their founding member, Prosper Niang, passed away.

Matt points out that the surviving Xalam members are reunited and are working on a new album. Xalam was influential in helping create the urban Senegalese sound with a creative mix of funk, jazz and traditional approaches.

While their recordings are difficult to find in the US (their album Apartheid is currently going for $59 used on Amazon.com), you can download and listen to samples of Xalam's music on their website. The Xalam website explains the name of the band:

Xalam, also called khalam, is a traditional stringed instrument from West Africa. Inspired by this, the afro-jazz percussive group from Senegal gave themselves the same name.

I'm looking forward to hearing the new recording when it is available.