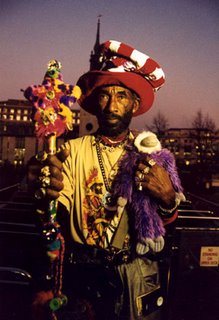 Mad reggae genius Lee "Scratch" Perry returns to Jamaica tomorrow for his first concert in his native country in more than 30 years.

He'll be headlining the Western Consciousness reggae festival in Westmoreland, Jamaica, outside of Negril. The event has been transformed into an informal tribute to Lee Perry, and includes Judy Mowatt, John Holt, Barrington Levy and other reggae greats.

The Jamaica Observer interviewed the legendary producer and composer last year when the historic concert was announced. Perry offered up that the reason he hadn't returned to perform in Jamaica from his home is Switzerland is because he was too busy "doing his job," which he defined as "fighting against Evil Forces."

Perry virtually invented reggae and dub in the late 1960s, and produced a long list of groundbreaking sonic statements by The Wailers and many other crucial Jamaican artists. He spent much of the subsequent decades locked in a personal spiritual quest that included burning down his own studio in a formal ceremony, then purportedly wandering homeless through Europe for extended periods. His return to active touring is a welcome blessing for fans worldwide (although a recent US tour was apparently canceled due to visa difficulties--crazy baldheads!).

The BBC website has a nice overview of Lee Perry's career, including some song files and a quote that says it all: "it was only four tracks on the machine, but I was picking up twenty from the extra-terrestrial squad." Other Scratch career highlights from the BBC:

* Alter egos include The Upsetter, Scratch, Pipecock Jackxon, Super Ape and Small Axe (real name - Rainford Hugh Perry)
* Cut his first record in 1959
* Threatened to kill Bob Marley after Bob nicked his backing band (they made it up though)
* Put a curse on the BBC that can never be undone till Perry's records are played round the clock

Be sure to check out the article "Good Always Conquers Evil: The Musical Genius of Lee Perry," for the influence of comic books, cartoons and kung-fu movies on Lee Perry's music.