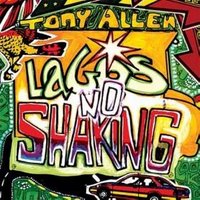 By David McDavitt
Tony Allen returns with a much anticipated new project for his thirteenth release. Recorded live in Lagos, with a full-sized Afrobeat band, "Lagos No Shaking" (Lagos is OK), signifies Allen's return to roots Afrobeat after forays into avant-garde electronica hybrids. "Lagos No Shaking" is due to be released on June 13, 2006.

From the BBC:
"This set was recorded in Lagos, and manages to harness the rugged grit of that difficult city, whilst simultaneously presenting Allen's signature sound with a slick production sheen. Intense horn riffs, choppy guitar, call-and-response vocals: all of these elements are interwoven with Allen's detailed, cyclic beats, his taut tripping lending an elastic tension to the dancefloor.

From Amazon.com (with audio samples):
"Many people have attempted to reinvent Afrobeat - chief among them Fela's sons Femi and Seun - but Allen's take on the genre is streets ahead of either of them. Recorded in the Nigerian city over 10 hot, heavy nights, Lagos No Shaking presents a calmer, less manic Afrobeat, delicately balanced between laid-back insouciance and urgency, loose-limbed polyrhythms and ferocious grooves. Features 11 total tracks. Honest Jon's. 2006."