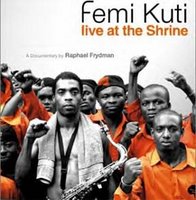 Femi Kuti hails "Live at the Shrine" DVD (includes live CD) to be his most cherished project because it reflects the reality of his music, his life, and of the Nigerian people.

"Live at the Shrine" contains a blistering live set interspersed with documentary footage of the New Africa Shrine (a nightclub, daytime hang-out, Femi's house, and spiritual & political center). Via the documentary we visit backstage with Femi's band & entourage, Lagos street life, and even Femi's inner sanctum (his on-site living quarters). We hear from Femi's sister (Yeni) and aunt (Fela's sister Dolupo), and see Femi interacting playfully with his wife & sons. Like his father, Femi has created a community around his venue- and his disciples idolize him as a prophet & guardian- it is quite heartening to witness.

This concert (87 min feature/46 min bonus) & interspersed documentary was filmed in Lagos during three shows on Femi's weekly "Sunday Jumps". All songs are strong, and all were chosen for performance/inclusion by his audience via democratic vote! Most songs are recorded uninterrupted and in their entirety. The quality of the video & sound is impeccable, though audio choices are limited to PCM 2.0 or AC3 2.0 only. It is equally amazing that such quality was achieved on a remote recording, and that the footage made it out of Nigeria (especially considering many of the songs denounce the abuses of the corrupt government). The band's sound is clear & well-balanced (amazing considering they are 20 strong!). Raphaël Frydman's cinematic sensibilities are quite pleasing, sensitive, and well edited. Frydman often employs split screen (like Woodstock) to great effect. DVD has optional subtitles in English, French, and Spanish (helpful in understanding Nigerian pidgin). The navigation screens are clear, attractive and efficient. Bonus footage includes more Femi interviews, a video for Shotan, and live uninterrupted footage of Yeparipa & Water no get Enemy.

OluFemi has matured greatly in the three years since his last offering. The music on this DVD (same on the "Africa Shrine" CD) is simply stunning- his best writing & performance to date. "Live at the Shrine" demonstrates Femi's return to pure, rootsy, powerful Fela-esque Afrobeat (i.e. less funk, no rap, and more serious political songs). This is unwesternized music for the hometown crowd! The songs have a groovy lope- absent is Femi's old tendency to rush his songs live. His 20+ member band is top-notch, infusing this recording with their own unique facets (ex. his jazz-influenced guitarist adds a lovely dimension).

"Live at the Shrine" is a masterpiece! Purcahse it here.