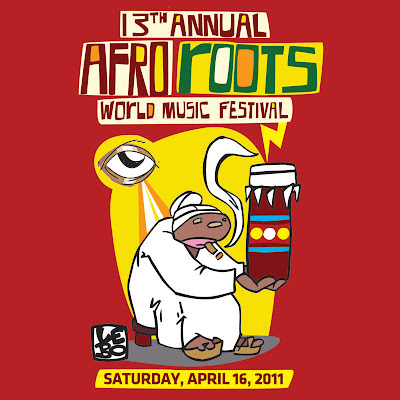 One of the most exciting world music events of the year will be in Miami on April 16th: the 13th Annual Afro Roots World Music Festival.

That's a dynamite lineup. For more than a decade this festival has been one of the premier world music events in the US, with a special emphasis on cutting-edge African and Caribbean sounds. A definite must-see if you live in the area, and a great excuse to head to Miami if you don't.

More on the festival and its history:

Community Arts and Culture presents the 13th Annual Afro Roots World Music Festival, Celebrating 13 years of serving Miami Dade County with quality programs, this festival has been noted by some as the longest running world music festival in Miami. The festival has been able to expand its reach beyond local South Florida artists by bringing in performers from African countries such as Senegal, Ivory Coast, Guinea, Mali, and the Republic of Congo. This global connection through music has helped the festival evolve into one of Miami’s most culturally diverse events.

On Saturday The Afro Roots World Music Festival main event will include the high energy sounds of Grammy Nominated group Boukman Eksperyans fusing traditional Haitian and Caribbean rhythms with rock and reggae. Also featured are Miami’s beloved Latin Urban Orchestra, Locos Por Juana who will be joined on stage by Ghana’s international music star, Rocky Dawuni. Also performing are the Spam Allstars who’s blend of Electro Descarga will be joined by the sounds of Senegalese Percussion Master Papa Malick Faye. Finally, kicking things off this year is Jahfe , an act that fuses roots reggae with many other genres including rock, dub, soul and R&B, creating a unique blend of organic sounds. World renowned painter and Miami native, LEBO, will be painting live to the music, and DJ MOSES will be spinning the sounds of the world in between sets.