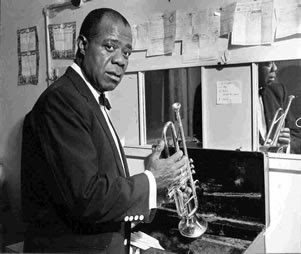 On television once, I saw some amazing interviews where people describe seeing Louis Armstrong's band in the 1920s. Early in Armstrong's career, the band traveled by paddle boat up the Mississippi River from New Orleans, stopping in every town along the way to play in the boat's ballroom.

In the interviews, various witnesses recall the overwhelming power, volume and rhythmic sophistication of those concerts on the paddle boat. It was before instruments were amplified, before radio and records were widespread, before modern jazz had ever been heard before. The big band was the Marshall stack of the era.

Given how fluid music is across borders these days, it's hard to imagine the searing impact Armstrong's band must have had at the time, especially in rural America. Some of the people interviewed described it as a life-altering experience that changed them forever, and made them want to become musicians from that moment forward.

Yesterday, there was a great article about Louis Armstrong by Michiko Kakutani in The New York Times. The piece is a review of a new biography by Terry Teachout, titled "Pops: A Life of Louis Armstrong." The review sums up nicely the musical tidal wave he created, a wave that still laps up on shores everywhere:

Louis Armstrong, a k a Satchmo, a k a Pops, was to music what Picasso was to painting, what Joyce was to fiction: an innovator who changed the face of his art form, a fecund and endlessly inventive pioneer whose discovery of his own voice helped remake 20th-century culture.
...
Mr. Teachout reminds us of Armstrong’s gifts: “the combination of hurtling momentum and expansive lyricism that propelled his playing and singing alike,” his revolutionary sense of rhythm, his “dazzling virtuosity and sensational brilliance of tone,” in another trumpeter’s words, which left listeners feeling as though they’d been staring into the sun.
...
“Even before his face became known to the readers of newspapers and illustrated magazines — and, later, to filmgoers and TV viewers,” Mr. Teachout writes, “Armstrong was the first jazz musician whose voice was heard by large numbers of people. In this way he emerged from behind the anonymity of the recording process and impressed his personality on all who heard him, even those who found most instrumental jazz to be unapproachably abstract. It was the secret of his appeal, and he knew it.
...
Although Armstrong’s life story has been told many times before, Mr. Teachout does a nimble job of reconjuring the trajectory of Armstrong’s experience, which coincided with — or was in the vanguard of — so many formative events in 20th-century Afro-American history, from the Great Migration that brought many Southern blacks North to cities like Chicago to the Harlem Renaissance of the 1920s and ’30s. He recounts the travails of touring that Armstrong experienced in a still segregated South, to his acclamation in Europe in the ’30s and ’40s and the mainstream American success he finally achieved in the ’50s.

The reader gets a dramatic snapshot in this volume of Armstrong’s life on the mean streets of New Orleans, where he grew up, the illegitimate son of a 15-year-old country girl, among gamblers, church people, prostitutes and hustlers; his adventures in gangland Chicago and Jazz Age New York; the rapid metamorphosis of this shy, “little frog-mouthed boy who played the cornet” into the most influential soloist in jazz; and the long, hard years on the road, crisscrossing the United States dozens of time, playing so many one-nighters that he often came off the stage, in his own words, “too tired to raise an eyelash.”

As Mr. Teachout astutely points out, Armstrong’s trumpet playing, like his singing and copious writings (including two published memoirs and countless letters, which he pecked out on a typewriter he brought with him on the road), was the means for Armstrong to reflect on all that he had witnessed. “I seen everythin’ from a child comin’ up,” he said once. “Nothin’ happen I ain’t never seen before.”

Boppers and avatars of the cool, in turn, rejected Armstrong’s desire to entertain the audience — to mug and clown on stage. And yet even Miles Davis, who in rejecting Satchmo’s crowd-pleasing ways went so far as to turn his back on the audience, acknowledged that the history of jazz radiated out from Louis Armstrong: “You can’t play nothing on trumpet,” Davis said, “that doesn’t come from him.”

In a companion piece also in the Times, music critic Ben Ratliff breaks down an astounding 1933 video clip of Armstrong playing "Dinah" in Denmark:

This is a short and efficient answer for why he was and is important. You sense he’s building his brand — the stuff with the handkerchief, getting up in the viewer’s grill, popping his eyes at .55 — but it’s still pretty extreme, and exciting. Look at how he felt music, and moved to it. (Especially .10-.20, that davening kind of thing: James Brown did that too.) Listen to the way he chopped up rhythm, sailing his phrases over the beat. You want to say he’s imitating a trumpet when he sings, but then you want to say vice versa, so neither can be true. He’s continuous, playing or singing something nearly all the way through, making his body part of the performance. Also, watch the band’s feet.