The Timeless Magic of Winston Rodney 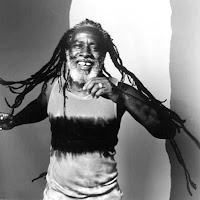 Burning Spear's latest release, Jah is Real, shows that the man hasn't lost any of his enormous talent.  It's his first album on his own label, Burning Spear Music, and a testament to what has made him one of the leading figures in reggae music for nearly four decades.

Producing on his own label is a watershed moment, since the business of reggae has not been kind to the musicians, and Mr. Rodney aka Burning Spear is no exception to this sad history.  As he sings in Wickedness, "they been robbing reggae artist," "our royalties feeding their family," "wickedness since 1969."  His other songs also have a clear, simple moral message:  In People in High Places, he insists that it's "time for you to speak up now"; in One Africa, he urges that "only if you come together now can you gain more than what you lost;" in Stick to the Plan, he calls on reggae singers and musicians to stick to the original vibe, "no worry yourself about big radio, no worry yourself about who they might know"; and in No Compromise, he proclaims, "my music no compromise," "I will pay no one on the side," "take me or leave me, "love me or hate me." As one reviewer describes, Burning Spear's work has always been "serious, defiant and historically aware." 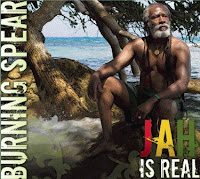 For decades, he's used his music to preach for peace and human rights, serving as the elder statesman of reggae and a cultural ambassador.  In 2007, he traveled to Kenya at the United Nations' request, following widespread violence triggered by a fixed election, and performed for over 60,000 people in Nairobi, bringing people together in extremely difficult times.

The music on Jah is Real has a powerful message, but it is also a joyous celebration of roots reggae, filled with layers of horns, backup vocals, organ, and guitar - all laid over a sweet dub beat. It's a lush sound that recalls Burning Spear's seminal work of the 1970s, but the music is also fresh and current - with some unexpected, but very welcome touches, like gospel backup vocals on "One Africa" and "Grandfather," and Bernie Worrel and Bootsy Collins (of Funkadelic and Parliament fame) on keyboards and bass on some of the tracks.

The result is yet another must-have from a musical giant and the king of roots reggae.  One of my favorite recent releases, from one of my favorite artists of all time.  From 1969 to 2009 - the spear continues to burn...