Gangbe Brass Band: "What Goes Around Comes Around" 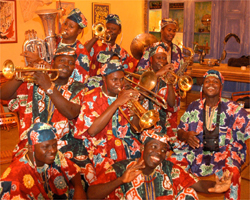 The Gangbe Brass Band has begun to achieve some well-deserved recognition for their amazing and unique sound, which combines the traditional drumming and rhythms of their native Benin with modern jazz and marching band arrangements. Listeners will recognize their sounds from New Orleans second line street music, and Gangbe Brass Band captures a similar carnival flavor with its groovy flair and biting horns. Formed by 8 young jazz musicians from Cotonou, Gangbe has created an unusual mix of music that will make you move in any language.

The Calabash Music website has a sampling of all the songs off their most recent album, “Whendo,” which they describe as “an extraordinary blend of voodoo rituals, with songs sung in a variety of African dialects backed up by dazzlingly electric performances.” The BBC’s Africa On Your Street website adds this:


While the voices and sometimes tonal percussion leave you in no doubt about their West African roots, the horns echo African military bands and European/American brass bands. The loping interplay of euphonium, trumpet, sax and trombone on "Segala", and the glorious swagger of "Oblemou" wouldn't sound out of place at a Mardi Gras in New Orleans (a city that has its own "voodoo" roots, which arose from its historical connection to Haitian "vodou"). And of course, that tradition began in very much the same part of West Africa that Gangbé Brass band hail from. What goes around comes around, as they say.


For their third outing, Benin's Gangbé Brass Band cast their net ever wider. Of course, there's the traditional sound, mixed with jazz, but this time it's from the music of New Orleans through to be bop, all played with consummate skill and fun, all grounded by some wonderful percussion, including plenty of stuttering talking drum. It's also a political record, lyrically concerned with Africa, its poverty and wars. But they also find much to celebrate, delving into an interesting take on Afro-beat with "Remember Fela," which also shows good familiarity with high-life music and the juju style of King Sunny Ade. More than ever before, this is where the pieces, both African and American, come together. The soloing is more confident, and everything crisper, while the percussion has become a more important factor. This is a band that's really found itself, with gusto and pleasure.

Readers of The Afrofunk Forum will definitely want to check these guys out if you haven't already. You can purchase downloads of Gangbe Brass Band from Calabash Music, or buy any of their first three CDs. I would love to see them live---any concert reports out there?