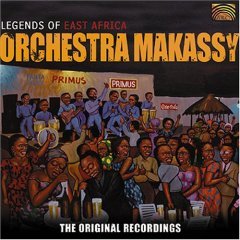 This album is as sweet as honey. With its infectious rumba rhythms and gorgeous electric guitar melodies, it exudes a potent Afro-Caribbean vibe that is sure to put a smile on your face. It's an East African classic, and one of my personal favorites.

Orchestra Makassy was immensely popular in Tanzania in the late 1970s and early 1980s, and included some of the biggest names in Tanzanian music, such as Mose Se Senga aka 'Fan Fan' and Remmy Ongala. The band's leader, Kitenzogu "Mzee" Makassy, was born in eastern Zaire (now called the Democratic Republic of Congo), and the music is filled with the sumptuous sounds of Zairean soukous. But the album also stretches eastward to the Indian Ocean: Makassy founded the band in Uganda in 1975; moved the group to Tanzania after Idi Amin forced him into exile; then recorded the eleven songs on this set (nine of which were originally released on the album Agwaya) in Kenya in 1982.

Perhaps it's the mix of different musical influences that makes this album so absorbing. Or maybe it's just the incredibly catchy tunes and the sparkling, luscious guitar work. As Robert Christgau of the Village Voice put it, "I love them because they're lovely."