When Music is Business in Africa 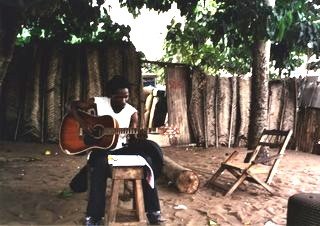 Before the current crisis, the Ivory Coast was considered the launchpad for West African music, the undisputed industry hub in the region. Why then has there been no distinctively Ivoirian musical form that has resonated significantly outside its borders (with rare, single song exceptions)? This is a question which preoccupied my head while living in Abidjan in the late 90s, and it is an excellent case study in the articulation of market forces (global and local) with local music making. Here are a few bullet points to begin thinking about this subject:

1. In Ivory Coast, performance IS studio recording. Live music was supplanted by DJs and by "playback" (lip-syncing) beginning in the 80s and continuing through today. The only way to make it as a performer (unless you've got mad $$) is to record, release your recording and then lip-sync in concert with a stable of artists, usually 2-3 songs each.

2. In order to record you need money, which for the majority of Ivoirian artists means finding a producer who will invest in your art.

3. The vast majority of producers want to do two things: save money and make money. To save money they record in tiny little closet studios virtually all on MIDI sequencers. To make money, they are excessively risk averse and far too often will ignore an artist's vision in favor of packaging the artist in the hot sound of the day. They also screw the artists unmercifully when it comes to sharing any proceeds not consumed by piracy.

4. There are only as many arrangers as there are little studios, likely fewer. These arrangers are defined as guys that can manipulate the computer-based recording equipment used in these mini studios. They work for the producer, and so give him what he wants. Often the artist is not even present during the creation of a backing track. This is at the root of the "cookie-cutter" effect felt so distinctly in Abidjan in particular.

5. The end result is a local scene characterized by very little innovation, virtually no "bands" or live concerts to speak of (with some exceptions), and most disheartening, entire generations of artists whose artistic vision is subjegated to market forces (to say nothing of the plight of the instrumentalist "gomboist"). Sure, you can bob your head and smile to Mapouka or Coupe Decalle, but it leaves you hungry for something of substance. It's like crack.

6. The irony is that much of the MIDI sequencing is perceived by its practitioners as infusing an element of modernity into the essentially organic creations that young, poor artists begin with (acoustic guitar, djembe, voice). But this same sequencer-based sound is what virtually disqualifies the local music from any sort of success in the "world music" market, which places higher value on organic, "authentic" sounds.

7. Another irony is that often an artist will be ignored at home for doing something too "folklorique" or too country. But if that same artist enjoys even a patina of success overseas (particuarly in Western Europe or the US), then they are much better able to succeed in their local market.

Again, these are just quick thoughts on the subject, but you get the picture, non? Now what are we going to do about it?