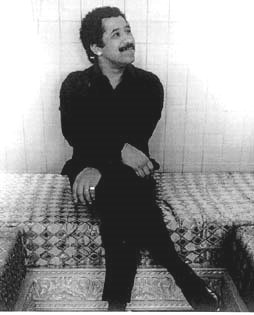 Here's an interesting note on Algerian rai music by rai superstar Khaled. This is taken from an interview conducted by Banning Eyre in 2004 for Afropop Worldwide:

"If you look at the history of blues and jazz, you find the history of rai. Jazz and blues is about people who are suffering, people who are hungry. They made blues because it was like their religion—telling
stories, saying words of suffering, of life. And also, there were no notes to write down. You don't write it down. The music of the cheikhas, you can't write it. Their big instrument was the gasba. ... At that time, when people went to weddings, had evenings among friends, when the gasba played, there was no microphone. They heard only a cheikh, the poet. Because there was no melody. It was poetry, people telling stories. Love stories. It's like rock-and-roll talks about peace and love. That's cool. I want to play that. I like that. I want to be in love. I want to break the taboos. I want to be human, drinking. It's not bad. It's what I feel. Rai was that, people in love, people who want to hear a story, because they feel bad. When the poets wrote, they wrote their own stories, but they touched other people, because it's the same line for everyone. That's why I say rai sings the life of everyday. "
For the full text of the interview, click here.
To listen to song samples and buy Khaled's music, click here.