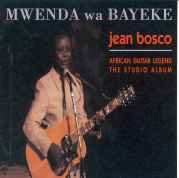 Congolese guitarist Jean-Bosco Mwenda (aka, Mwenda wa Bayeke), was one of the most popular and innovative musicians of his day across central, eastern and southern Africa. Beginning in the early 50s, Bosco's signature syncopated, finger-picked guitar sound made him much in demand throughout the region, and took him as far as Europe and even an appearance at the Newport Jazz Fest in '61.

When electrified rumba bands began developing that new, all-consuming sound in Congo in the late 60s, Bosco stuck to his original formula and his music was relegated to the status of "oldies." But it was on the shoulders of Bosco and artists like him that this new music firmly rested. When you listen to Bosco play and sing, the line of continuity is abundantly clear from what he was doing to what we hear today from even the most hyped-up Congolese superstars.

Recorded in Cape Town in 1988, and re-released by Rounder in 1995, this CD represents Jean-Bosco's final recording session. He is recorded solo with guitar, likely a rarity for him, and even allows an instrumental version of one of his most famous tunes, Masanga. Excellent liner notes as well.

If you are a guitarist, I urge you to pick one Bosco tune and figure out how to play it. You'll learn a ton in the process. Once you've accounted for all the sounds Bosco is making, try singing along...