Geraldo Pino Back in the Mix! 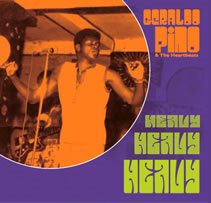 The geniuses at RetroAfric have done it again. There have long been rumors of groundbreaking afrufunk by Sierra Leonian bandleader Geraldo Pino (aka Gerald Pine), but not until this recent re-release by RetroAfric have we been able to experience his music in such a heavy, heavy dose.

Not only are the grooves just deliciously phat, but the sound quality is much better than one might expect from a 60s era recording from Africa. Pino himself was an engineer, and his commitment to good sound just makes this recording all the more satisfying.

Here are a few comments from Fela himself about Pino's impact on the Nigerian scene (from the liner notes):

"I was playing highlife jazz when Geraldo Pino came to town in '66 or a bit earlier with soul. That's what upset everything man. He came to town with James Brown's music, singing, Hey, hey, I feel all right, ta ta ta ta... And with such equipment you've never seen, man. This man was tearing Lagos to pieces."

"...[Pino] came in a big way: in a convertible Pontiac; you know, one of those big American cars, man. Flashy, new equipment. Lots of bread. He was doing his thing, man. He had everything I didn't have."

"After that mother$*%!ing Pino tore up the scene, there wasn't shit I could do in Lagos. So I went to Ghana in '67... At that time that's where the action and the bread was. So, we went to Ghana. After seeing this Pino, I knew I had to get my shit together. And quick!"
(excerpted from Fela, Fela, This Bitch of a Life, by Carlos Moore 1982)